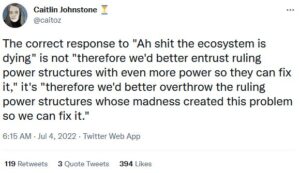 Johnstone is very smart, creative, and insightful. She is successful and has a large following. And on its face, I have no objection to what she’s written.

If pressed, most of the left will argue in vague terms for socialism. But there’s never any specificity as to what socialism means to them.

Does socialism mean a society that looks more like Sweden, the former Yugoslavia, or the former Soviet Union? The word socialism has been used to describe all of these.

The problem with the word socialism is that it’s not well-defined. It’s not a technical term. When I say “technical term,” what do I mean?

If I’m walking down the street and someone puts a gun to my head and says, “Give me your wallet,” I could say to the police that someone forced me to give him my wallet. Or I could say he made me give him wallet. In this context, the word “force” is not a technical term, which is why I could say, “he forced me,” or “he made me.” It makes no difference.

Likewise, if I go to a “Star Wars” convention, the word force is also a technical term — it means something very specific. To a physicist or a “Star Wars” fan, when I use the word “force,” I mean one and only one thing. And if I wish to refer to that thing, I have to use that word (force), or else I can’t talk about that thing at all.

“Socialism,” however, is not a technical term. Rather, it’s a catch-all word like “widget.” It means whatever the person using the word wants it to mean.

Imagine I’m in front of an audience of hundreds of people, and there’s a whiteboard behind me. I could get any five-year-old out of the audience, hand them a marker, ask them to draw a circle, and they could easily draw something we would all recognize as a circle (even accounting for the fact that the artwork might not be great). Everyone, even five-year-olds, knows what a circle is.

Now, in front of that same audience, if there were a someone who had a Ph.D. in molecular biology and I brought him up and asked him to draw a widget, his first question to me would be, “What’s a widget?” because no one knows what a widget is.

Geometric shapes like “circle” and “square” are technical terms, and everyone knows what they are, what they mean, and what they refer to. But talking about socialism is like talking about widgets. No one has any idea what it is — it means whatever the person using the word wants it to mean.

Saying capitalism is bad and should be replaced, without saying what is supposed to replace it, or simply making references to replacing it with “socialism” is like talking about widgets. It’s meaningless. It’s also not even remotely threatening to the existing power structure.

To some people, Sweden is socialist. Now, if you are the one using the word socialism, you may use it any way you wish since it’s not well-defined. So you can certainly use it to describe Sweden if you want. But then how do you describe the former Soviet Union? Do you call it communist? Okay, then how do you describe the former Yugoslavia? At this point, you are probably out of terms, since you probably have no idea what you’re talking about anyway.

Sweden has a private-enterprise market economy, like the United States. I think it makes the most sense, therefore, to call Sweden capitalist. What Sweden has that the U.S. does not is a real social safety net. The technical term for capitalism with a social safety net is “social democracy.” Again, you can use different terms if you want, but this is what makes the most sense to me: Sweden and the U.S. both organize economic activity using capitalism. But Sweden is a social democracy, while the U.S. is not.

What the former USSR and the former Yugoslavia had in common was that workplaces — the means of production — were not privately owned. They were owned by the state. That makes both of these public-enterprise economies, not private-enterprise ones. But Yugoslavia used markets for allocation (“allocation,” in this context, is a technical term that I have yet to define), while the Soviet Union used central planning.

What are you for?

The problem is that no one on the left — I mean, really, no one — has an answer to this question. Everyone on the left just engages in hand-waving, but no one will really think about the question and provide a specific answer. We’re all just supposed to agree that, because capitalism sucks for most people, then any entreaty for anything that is “not capitalism” must be good.

The problem is, it’s not. It is useful for fundraising, of course, since once you start to toss specific ideas around, your money will dry up. Lots of people can agree they hate capitalism and they’re happy to fund you if you say so too. But if you start to call for specific replacements for capitalism — you know, like participatory economics, which is neither capitalism nor any form of socialism — then you will start a fight and many of your donors will start drifting off.

The problem is the left can’t discuss what it wants. The reason is because, deep down, what the left wants really is socialism — in the sense that I use the word: The left wants a public-enterprise economy, of any description.

The problem is that the left can’t be honest about what it wants — not even with itself. The reason is that neither market socialism nor centrally-planned socialism would actually represent working-class liberation. Rather, they both simply involve putting workers under new management — the left’s management.

Because arguing for any form of socialism is such a weak message, the left can’t trumpet it. You can’t really try to organize millions of downtrodden people by saying to them, “Take off your chains, and put these new ones on instead.”

And like an alcoholic who can’t admit he has a problem, the left can’t look in the mirror and see honestly the fundamental immorality of what, deep down, it really wants. That’s why the left loses and can’t win anything, and why it’s never going to win anything. Its core message is fundamentally self-serving, and even though no one on any side is consciously aware of that, everyone can feel it, and they react accordingly.

If the left really wants to win anything, it’s going to have to make a choice. Unfortunately, it already has. Most alcoholics never quit drinking. The left, too, will never figure this out. That means, sooner or later, the only place for us to end up is hard fascism.

1 thought on “What are you really for?”